Advice on Beijing to Lhasa Tour

At present, there is a daily train from Beijing to Lhasa run by China Railways. The train from Beijing to Tibet takes about 41 hours to cover 3753 kilometers, of which 1110 km are over Qinghai-Tibet railway. It departs from the Beijing West Railway Station at 20:10 and arrives at Lhasa Railway Station at 13:03 on the third day after nearly 41 hours.

There are hundreds of tourist senic spots and historic sites in Beijing. Some are walkable. Some are a little far from the city center. Among the numerous spots, there are some must-see attractions in Beijing, like Tiananmen Square, Forbidden City, Temple of Heaven, Summer Palace, Ming Tomb, Great Wall, Hutong, Olympic Green and Capital Museum. However, it will take you two or three days to visit all of these major sites. If you just stay in Beijing for one day for sightseeing, we suggest you visit the highlights of Beijing, Forbidden City, Tiananmen Square and the Great Wall.

2. Transferring from the Beijing airport to the west railway station?

Besides, there are direct buses from the airport to the railway station, with departure frequency of 15 to 20 minutes.

If you need, Tibettravel.Org can also provide the airport to train station service in Beijing (this service is from 100USD), the driver will give you the train tickets and permit in person.

3. Documents for riding the Beijing to Lhasa train

Usually, it is not easy to get a train ticket to Lhasa in the peak tourism season of Tibet. Therefore, if you want to enjoy a smooth Beijing to Lhasa train trip, it's better to book the train tickets in advance. Tibettravel.Org is one of the few big companies in China which have a stable relationship with the railway station tickets office, and can offer train tickets booking service to travelers.

6. Cost for a trip from Beijing to Lhasa by Train

At present, the Beijing to Lhasa train will cost you around RMB1300 for a first-class sleeper berth, around RMB800 for a second-class sleeper berth and half that for a soft seat. Besides, in China, the train fare does not include meals, so you need to pay the food in the train, a normal breakfast will cost you about 10 RMB and a lunch or dinner 20-30RMB. Drinking water is free but if you want to have a cup of coffee or milk, you need to prepare in advance. Except the cost on food, another big expense on the Beijing to Lhasa train trip is that you have to pay the service charge to the travel agency who help you purchase the train tickets. The cost ranges from 100RMB to 500RMB in different seasons. In a word, the total cost of Beijing Tibet Train Journey is about 1600RMB.

7. Luggage Allowed and Forbidden for taking a train from Beijing to Lhasa

There are some restrictions for carry-on luggage if you taking a train from Beijing to Lhasa.

Banned objects on the train:

- Objects forbidden by the nation or confined to transit;

- Dangerous goods defined by the law, regulation or rules, ammunition or unidentifiable chemicals;

- Objects able to destroy or contaminate the train;

- The norm or weight beyond item 51 of this regulation.

- Objects able to destroy or contaminate the train;

Child (refers to children whose height is shorter than 1.3m): 10kg luggage for each.

8. What to pack for the 2-day Beijing to Lhasa train journey?

You should realize that you will spend 2 nights in the train. The Beijing to Lhasa Train is considered as a 3-star facility train in China, but it is not a hotel, no disposable provided. You need to prepare your own slippers, towel, cup, teeth brush, teeth paste, soap, even tissue paper to the train. Another problem you have to think about is the food, although there is a restaurant car in the middle of the train which provides expensive Chinese food. At least, you'd better buy some milk, bread, fruit and so on for your Beijing to Lhasa train trip.

According to the sanitarian department and doctors, the passengers can travel to the plateau only after, finishing their physical examination and approved by the doctors. Passengers are not suitably travel to the plateau area where above 3,000 meters when they have one of the following diseases: Each kind of nature heart disease, apparent heart heat abnormal or the heats are above 100 times per minute, the hypertension II, blood dissease and the brain vein disease. Chronicity respiratory system disease moderate above blocking lung disease including bronchia tube asthma, bronchiectasis, pulmonary emphysema, activity pulmonary tuberculosis, dust pulmonary tuberculosis etc.

Sleeper ticket holders can relax themselves at the east side of the entrance hall on the 2nd floor.

Z21 waiting room is dedicated for passengers taking train from Beijing to Lhasa. 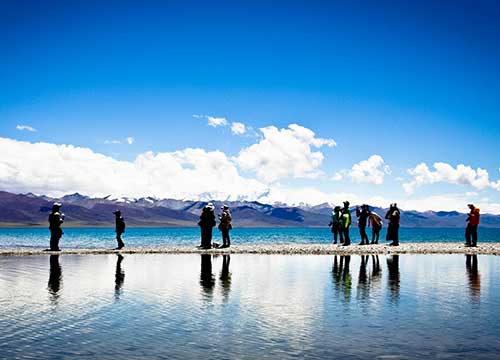 Advice on Beijing to Lhasa Tour