When it gets colder and dryer in November in Tibet, December weather becomes even harsher and it is in winter now. However in Lhasa and Tsetang, it is not as cold as many people usually imagine at all.

The average maximum daytime temperature in Lhasa, Tibet in December is a cold 6°C (43°F). The average night-time temperature is usually a very cold -12°C (10°F). There are usually 8 hours of bright sunshine each day, which represents 82% of the 10 hours of daylight.Expect 1mm (0.0 inches) of rainfall across the whole of December with 1 day with some rain falling. Maximum UV levels will be moderate (5 UV index) at midday when the skies are clear.

What to visit in December:

There are fewer tourists than in summer in Tibet. However it is quite suitable for some short distance culture tour in Lhasa, Tsetang and Shigatse because there are a series of price discount including ticket price, hotel price and airfare during winter. The ticket price for most scenic spots in Tibet is only half of that in the peak time for tourism in Tibet. The hotel price drops by about 20% to 50% from December to next March (Normally no permits can be obtained in Feb and March). But please be advised that some hotels will be closed in winter.

What to wear in December:

For the temperature extremes as you travel and the nightly temperature drop, dress in layers with a coat, trousers, and a T-shirt. Though the UV radiation is relatively moderate, you can wear a sun hat and sunglasses for comfort. You might need a coat inside many hotels and restaurants because many don't have central heating. Take a heavier coat and gloves up to higher areas.

4. March and early April are always travel blackout dates in Tibet due to the political situation. Generally, the closure dates are from about February 27th to March 30th, with the permit process starting again around April 1. This means that you can usually actually start travel in Tibet after April 10 or so.

5. Please be aware that February can be a bit windier than early winter and that late February should be okay, but is getting very close to the annual closures. 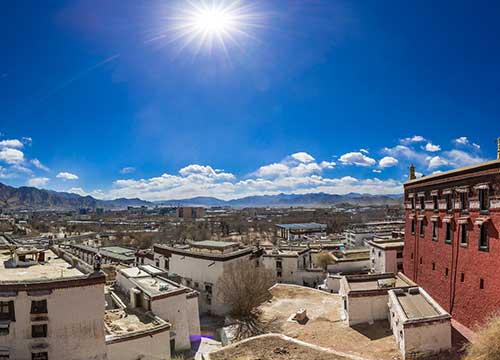