Tibet reaches the coldest time in January. In January, temperatures drop well below freezing at night in almost all of Tibet. During the day, it may feel nicely cool in Lhasa and even at such high places as Yamdrok Lake. It is dry, cold, and sunny generally. It is worth mentioning that the weather is quite sunny and you can always see the blue sky and Snow Mountain.

The average maximum daytime temperature in Lhasa, Tibet in January is a cold 5°C (41°F). The average night-time temperature is usually a very cold -13°C (9°F). There are usually 8 hours of bright sunshine each day, which represents 78% of the 10 hours of daylight.Expect 1mm (0.0 inches) of rainfall across the whole of January with 1 day with some rain falling. Maximum UV levels will be moderate (5 UV index) at midday when the skies are clear.

What to visit in January:

Due to the heavy snow and severe weather in January, the road to Nagchu and Ngari prefecture might be blocked at that time. And the weather is extremely cold in these areas. It is not suggested to visit these places considering the safety of the tourists. Besids, Namtso lake is frozen during winter time. The following places are still very popular even in the cold winter time: Lhasa (3650 meters) The holy city Lhasa is famous for its beautiful landscapes, thousand-years-old history, unique Tibeatan culture, sunshine & blue sky and friendly local people. The most outstanding highlight is its magnificent palace and temples, such as the famous Polata Palace, Jokhang Temple, Barkhor Street, Drepung Monastery, Sera Monastery, and Norbulingka. Shigatse (3,900 meters): Shigatse is the second largest city west of Lhasa about six hours west of Lhasa. The highlights in Shigatse include Tashilhunpo. In January, the average high temperature is 6 °C (42 °F), and the average nightly low is -13 °C (9 °F). Besides these 2 places, Tsedang area and Nyingchi area are also available and you can choose these 2 places to visit during winter time.

What to wear in January:

For the temperature extremes due to changing altitudes and the nightly temperature drop, dress in layers with a coat, trousers, and long underwear. The UV radiation is intense, so a sun hat and sunglasses help. Many hotels and restaurants don't have central heating, so you might need to wear your coat even inside. Wear a heavy coat and gloves in the higher areas.

4. March and early April are always travel blackout dates in Tibet due to the political situation. Generally, the closure dates are from about February 27th to March 30th, with the permit process starting again around April 1. This means that you can usually actually start travel in Tibet after April 10 or so. 5. Please be aware that February can be a bit windier than early winter and that late February should be okay, but is getting very close to the annual closures. 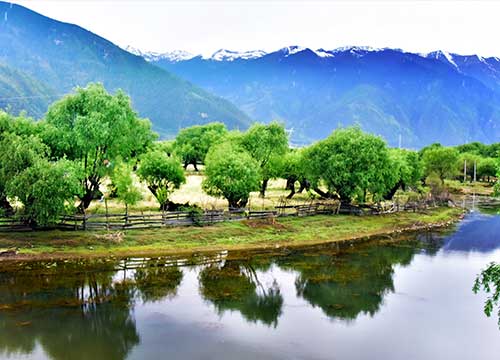