February is the still harsh winter in Tibet. It is quite windy and dry. The average temperature in Lhasa is 9 °C (48 °F) and -7 °C (20 °F). But it is not as cold as in Beijing or Harbin or some cities in Europe such as in Italy in the winter. Even through the roads to attractions in Lhasa, Gyantse, Shigatse, Tsetang and Nyingchi are still accesible. It is not suggested to travel to Namtso and Everest since most cases the road are blocked by heavy snow and it is dangerous to drive on some parts of the icy road.

The average maximum daytime temperature in Lhasa, Tibet in February is a cold 7°C (45°F). The average night-time temperature is usually a very cold -9°C (16°F). There are usually 8 hours of bright sunshine each day, which represents 70% of the 11 hours of daylight.Expect 1mm (0.0 inches) of rainfall across the whole of February with 1 day with some rain falling. Maximum UV levels will be high (7 UV index) at midday when the skies are clear.

What to visit in February:

The special seasonal cultural highlights of February are often the Tibetan new year festivities that last for two weeks.

Due to the heavy snow and severe weather in February, the road to Nagchu and Ngari prefecture might be blocked at that time. And the weather is extremely cold in these areas. It is not suggested to visit these places considering the safety of the tourists. Besids, Namtso lake is frozen during winter time. The following places are still very popular even in the cold winter time:

Shigatse (3,900 meters): Shigatse is the second largest city west of Lhasa about six hours west of Lhasa. The highlights in Shigatse include Tashilhunpo. In February, the average high temperature is 8 °C (46 °F), and the average nightly low is -10 °C (14 °F). The higher altitude makes it slightly colder than Lhasa.

What to wear in February:

It is good to dress in layers for the temperature swings as you travel and the nightly temperature drop. We suggest a coat, trousers, and long underwear. The UV radiation is intense, so wear a sun hat and sunglasses. Many hotels and restaurants don't have central heating, so you might need your coat inside. Wear a heavier clothing and gloves in the higher areas.

4. March and early April are always travel blackout dates in Tibet due to the political situation. Generally, the closure dates are from about February 27th to March 30th, with the permit process starting again around April 1. This means that you can usually actually start travel in Tibet after April 10 or so.

5. Please be aware that February can be a bit windier than early winter and that late February should be okay, but is getting very close to the annual closures. 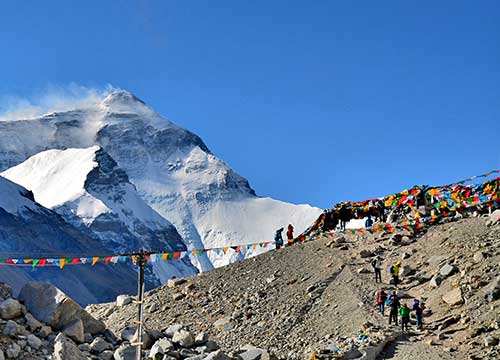